The very first time I asked Qwynn what she wanted to be for Halloween she excitedly said “A cupcake!” I instantly googled “homemade toddler cupcake costume” and was thrilled with all of the ideas I was seeing. I couldn’t wait to put this together!

Then the inevitable happened. A couple weeks later, Qwynn changed her mind. Toddlers! She wanted to be a pumpkin. Bummer! I was really looking forward to making a cupcake. Luckily, I was able to convince her to be a pumpkin cupcake. Easy enough, right? But the next week Qwynn changed her mind again. Really? She wanted to be a horse. Really??? So, I suggested a horse cupcake, and the last week before Halloween she added the stars.

And this is how the Horsey Cupcake with Stars was born!

I originally wanted to use a lamp shade for the cupcake liner, but it was harder to find one than I had originally anticipated (especially since I didn’t want to spend a lot of money). Eventually I found this idea, and with a few tweaks here and there, I was able to make an amazing cupcake costume!

A round laundry basket would’ve been way too big for a toddler, but I was able to find a good sized bucket at DEALS for just $1. I grabbed two of them in case I messed up on the first one. I also found the modern patterned contact paper there for just $2 and thought it would be a sturdier option than wrapping paper (Qwynn falls down a lot!). 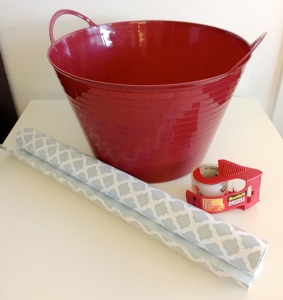 I cut the bottom of the tub out using a utility knife and scissors. Then I covered the rough edges with strips of the contact paper and reinforced it with strong packing tape.

I used my Cricut cutting machine to make horse stickers for the cupcake liner. I didn’t want to make a special trip to Michaels to buy sticker paper, so I used large shipping labels instead. Our printer has been out of commission for awhile, so I used brightly colored markers to color the horses. 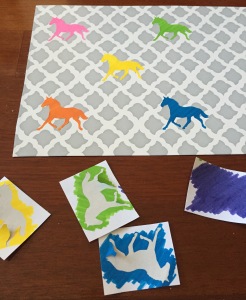 I covered poster board in the contact paper to add a little more support, then I attached the horse stickers and folded it accordion-style. 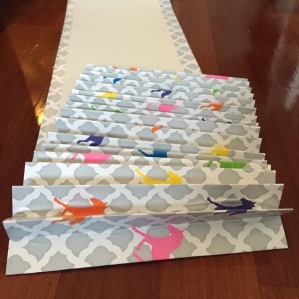 I bought two pairs of white women’s opaque tights at Target for about $5 each to use for the frosting. Since Tyson hates that we have so many throw pillows on our couches, I decided we could spare one for the stuffing inside. It was the perfect amount! I used hot glue (and a lot of it) to attach the frosting to the top edge of the bucket and the cupcake liner around the bucket.

For the star sprinkles, I used my Cricut again to cut different sized stars from colored card stock and then hot glued them to the frosting. 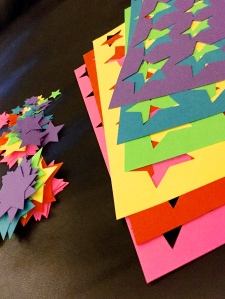 I couldn’t believe how easy this cupcake was to make and how perfect it came together!

The hat was another story! I had an extra stuffed tight leg, so I turned it into a dollop of frosting and made a candle out of a foam art brush.

I originally attached the frosting dollop to a headband, but it was too top heavy and wouldn’t stay on Qwynn’s head. I remembered Qwynn had a sun hat that was too floppy for her, so I cut the brim off and hot glued the dollop of frosting to the hat.

It wasn’t perfect, but with the help of a few clips, it stayed on her head long enough to snap a few pictures.

That’s one cute cupcake if you ask me!